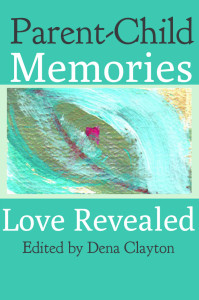 Parent-Child Memories: Love Revealed is the second anthology in the Love Revealed stories series. Readers are welcomed by ten spirited authors who dare to ignite memories of their parents and children that are reflective, transformative, raw, or funny. New lights shine brilliantly on topics that include compassion, child and parent losses, hope, breastfeeding, eating disorders, forgiveness, and reunion. These true stories hold a potential to heal soul wounds, as did the preceding collection in the book, Mother-Daughter Memories: Love Revealed.

An excerpt from the Preface:  Each of the following parent-child stories will touch you, sometimes in surprising ways. I want you to have a peek at the themes that emerged in this collection of heart healing stories:

These stories bring my thoughts to my father and the memories we’ve made throughout my life. Shortly after my Aunt Anna’s death, in 1983, my cousin forwarded photographs and letters to my father that my aunt had kept following my grandmother’s passing ten years earlier. What a delight to discover the letter Daddy sent his parents the day after my birth in 1949! His excitement flies off the page with the stream-of-consciousness fervor of a 30-year-old initiate into fatherhood. Here is my favorite excerpt: “I asked to see the baby and when they held her up to the window I could hardly believe my eyes. She wasn’t red and ugly like I expected a newborn baby to be. Honest – she was cute as heck.”

As early as second grade, I recall my mother’s frequent comment as my sister and I set the supper table, “I want you girls to know how lucky you are to have a really wonderful daddy. Just look at Mr. Stevens, his kids don’t have a nice father like you do.”

We have home movies of the day my father crafted an igloo on top of our well’s cement lid and he helped us make a snowman with a sculpted face nearby. At four and six, my sister and I were thrilled to be part of his creativity and spontaneous fun. We have relived those sunny moments in the snow so many times over the years, laughing at Daddy’s movie magic of filming first the igloo with his daughters beside it, stopping the camera, then capturing the smiling face of little Neva crouched inside the igloo, waving from its arched doorway. “Abracadabra!” we exclaimed, again and again.

My mother’s father was resourceful in fashioning playhouses for his daughters wherever the family moved. Treasuring her sweet memories, my mother wanted us to have some kind of a playhouse after our family moved to the countryside and lived on ten acres. The summer I was seven, Daddy and Uncle Floyd moved an old chicken coop from the woods to a place near the west side of our home. They cleaned it, put in smooth boards for a complete floor, and installed an intercom telephone system between the playhouse and my family’s kitchen. It was a magical space – a place we and visiting cousins enjoyed during summers and the milder times of spring and autumn. The welcoming doorway and curtained window were open to the elements: breezes blew in from all four sides, rain showers played a melodic rhythm on the tin roof. We swept the floor, mimicked cooking, and put our doll-children to bed. We told stories, danced, sang, and drew pictures. I am forever grateful to both my father and my mother for giving us that prime piece of real estate.

When I went away to college, my father sent me encouraging notes along with pamphlets by Norman Vincent Peale from The Power of Positive Thinking. I wish I had kept his letters. On one of the trips when he collected me from school for a holiday, he instituted a game of us reading backwards the words on road signs. A “No Parking” sign sent us into spasms of laughter. (Go ahead, say it out loud!)

I think I inherited from my father the ability to see humorous potential in words. As long as I can remember, my father has been well known for corny puns, eliciting groans or outright chuckles. At Thanksgiving dinner last year, when my cousin asked, “Do you want a roll, Uncle Johnny?” he quipped, “No, I’m too tired to roll.” And he was famous at work for writing commemorative birthday poems in limerick form to his co-workers.

When I visit my father next week, I am eager to hand him a copy of this preface. He always enjoys our strolls down memory lane. He was 93 in March and soon I will be moving to the Shenandoah Valley of Virginia to be with him. As I sort through many papers and belongings, I am at times engulfed by memories. I realize my good fortune to have parents who have been sources of compassion who imbued my life in love from the very beginning. I feel renewed gratitude to my family.

It excites me that I am experiencing adventures in the terrain of publishing in my early 60’s.

“Banana Man” by Nancy Kern
“Personality” by Corby Caffrey-Dobosh
“Twenty-Seven” by Alison Melotti-Cormack
“A Letter to Liz at the New Year” by Susan Gordon
“Longing” by K. Being
“Her Town” by Sindee Ernst
“At Long Last” by Krishnakamini
“How God Works” by Marilyn Finch Williams
“Darkness to Light” by Carol Lackman-Smith
“Chocolate and Mink” by Victoria Moo Briddell