This week I found a journal notebook I used a few years ago. Specifically, I was delighted to find entries for an on-line writing class of Max Regan’s; he sent us a new writing prompt daily for 50 days. Starting to flip through the first pages, I can see possibilities of several drafts I might share with you in the coming months.

In September of 2010, the 22nd prompt of the course asked each of us if something really great or really terrible had ever been received in the mail. Here is the draft I found in the journal, as is.

I have to laugh when recalling a surprise that came in the mail when I was about ten years of age. Was it for my tenth birthday? or maybe that Christmas? 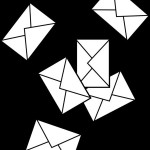 Granddaddy Kidwell died suddenly in April, 1959. For the next month or so, our family spent extended periods in my parents’ hometown. The grown daughters were in the midst of many decisions while closing out their parents’ home and deciding on the best care options for their mom. I attended school at least a few days with my cousin, Joyce;  we were both nearing the end of 4th grade. It was in her class that I became acquainted with my first boyfriend.

Jimmy W. (Note: His last name was fairly unusual, and he may still live in the area. Let’s allow him the privacy of anonymity, for now.)

From what little I recall of meeting Jimmy and of seeing the school photo he later gave me, he was near my height, of slight build, with sandy hair and bangs, and maybe had blue eyes. Our photos were black-&-white, even if I still had his picture, I wouldn’t know the color of his eyes.

I don’t recall writing to him, though we may have exchanged letters. What I do remember is receiving a letter sized envelope from him and it was lumpy. There was a note on lined notebook paper and . . . . something else . . . . a necklace. The pendant was faceted dark green glass with a glittery rhinestone in the center. I probably swooned on opening it! Surely, this was the most glorious piece of jewelry ever wrought. I wish there had been a video made of my reactions. Perhaps more interesting might have been to view my mother. Was she able to hold off laughing until I was out of her sight? Likely, she saw this little romance for what it was: awkward  puppy love. Imagine if she’d already been manager of the upscale jeweler’s, and a daughter had received such a gem!

If I’d not been allowed to write to Jimmy before, I’m sure it was permissable to express written gratitude for his present. My sister and I were trained to send thank-you notes for gifts received. The same general formula we always followed would have looked like this: Dear Jimmy, thank you very much for the necklace. It is very pretty. I am wearing it now. Thank you, again. Sincerely, Dena

What is something really great or really terrible that you ever received in the mail? What happens if you start jotting a first thought about one of these examples? When I dive into a memory elicited by a writing prompt, often more details surface.

You might pose this prompt to a small circle of friends via email, or offer it for a 10-minute writing exercise when lunching with the girls at a favorite eatery.