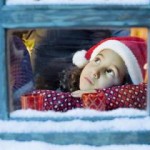 Looking back at your childhood, does it seem Christmas times were more . . . . festive or magical or fun than now? I was thinking about this recently, and I decided to investigate my recollections of my first ten or so years.

Then I remembered an idea of a gift exchange my cousin, Joyce, suggested two years ago. Her idea was for cousins to jot down our recollections of childhood Christmas times. So, I retrieved that document on my computer this week and relived some of the wonderment  again; I remember that’s what happened while I was writing it, too. I want to share some excerpts from it with you.

* * * I remember one Christmas night when I heard warm and familiar voices wafting up through the floor heating grate in the room my sister and I shared upstairs when visiting Grandma and Granddaddy. I could hear their soft laughter intermingling with that of their four daughters and sons-in-law. Somehow, I knew this was a ritual they all engaged at the end of every December 25th. Some were in the parlour on the dark green horsehair sofa. Others were in the adjoining sitting room near the coal stove.

When I heard Granddaddy’s hat mentioned, I knew he’d brought in his dark gray felt fedora. Someone handed out slips of paper. Pencils were shared as each sister wrote her name and folded the paper. Granddaddy collected the offerings in his upside down hat.

I felt comforted by the continuity of this long standing practice of drawing names. Each married couple purchased a gift for one other couple for the next Christmas. I suppose they all gave their parents gifts.

I suspect I may have been nine when I heard those pleasant murmurings through the grate. If so, it would be the last Christmas in their home. Granddaddy died the next May, then Grandma in November. I embrace this memory, and these inner sensations of comfort and belonging, as part of the very roots from which we cousins grew.

* * * Any time of year, my parents often sang together in the car. And they welcomed Neva’s and my piping voices joining their alto and bass. They began singing in the church choir when they were in high school together. We happened to be singing “Oh Little Town of Bethlehem” one night when we saw the lights of a hillside as we drove toward their hometown of Westernport. For some time afterward, I thought of the town we were visiting as both Bethlehem and Westernport. In the many decades since, when I approach the town after dark, the lyrics begin to play in my mind and on my lips.

* * * So many Christmas seasons, I remember the joyful anticipation of arriving in Westernport and reuniting with our cousins. Especially at Christmas, as soon as my family entered the doorway on Central Avenue, six little girls were destined to squeal and jump around with uncontained excitement, happiness, zeal, and nerves. Then, there was the hugging and squealing. Rosalind, Joyce, Naoma, Neva, Janice, Dena. As I look back, the excitement felt to me as if a balloon of happiness was filling my torso – – and it was necessary to squeal and jump around to let off some of the pressure.

* * *  There is a memory I think we all have of one particular afternoon. It seems to me four of us may actually have been perched on the top bunk of the new double-decker beds in Joyce’s and Janice’s bedroom. We were singing Christmas carols. I wonder if a grown-up had suggested this activity to keep us out from under foot. My mother comes to mind as a possibility. Anyway, my recollection of this caroling time was that I felt our hearts were sweetly connected. Even with an age span of 3 ½ years or so from youngest to oldest, we could all participate equally in singing much loved and familiar Christmas songs. I have a sense Neva was no more than 7-ish at that time.

We were singing, “It Came Upon a Midnight Clear”. The last two lines of the 1st verse are: “The world in solemn stillness lay, to Hear the Angels sing.” We were all singing the melody, and suddenly heard Neva’s high pitched little voice, “Sing, sing, sing, sing” at the end of the phrase, expressing the harmony in individual descending notes. How she knew to do that, I don’t know. And we all laughed with the surprise and delight of it.

I was sorting through family photographs a couple weeks ago, and I put aside several from my earliest Christmas times. My father’s hobby was photography. When my sister and I came along, he made photo holiday postcards every year. Here is an example of his creativity, circa 1952.

* * * unpacking the crèche every year at home and gazing at the little Baby Jesus nestled in the manger – The stable was at most six inches high. We spread a handful of straw in front of it and added more figurines to the holy family, angel, shepherd, and wise men. We had creatures, the favorites being the 2 antique sheep my mother’s Aunt Annie gave her when she was a child. Eventually, there were celluloid animals from my grandparents’ tree yard decorations – a cow and a horse with a bit of cotton making do for a lost ear. This quirky and beloved nativity scene held pride of place atop the television set. 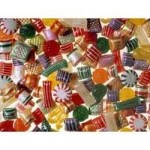 * * * walking into Grandma Clayton’s home on Christmas day – After welcoming with hugs, she always offered each of us a piece of Christmas themed ribbon or hard tack candy. The metallic blue candy dish had even more magic than its loveliness and the sweet treats inside. When the top was lifted off, the melody of “Oh, What a Beautiful Morning” met our ears.

* * * the Christmas tree on the library table in my maternal grandparents’ parlour and Granddaddy’s bubble lights in the nearby window framed by Grandma’s white lace curtains – I would stand in front of that window in a kind of trance, gazing into the effervescent glowing colors.

* * * waiting with my little sister for the signal of permission to descend (race down!) the stairway and into the parlour to discover our bulging Christmas stockings and new dolls from Santa.

* * * seeing the current Gingerbread House or decorated cake as well as pies (mince meat – yum!) and a wealth of cookies in the Metcalf dining room and kitchen.

* * * that one time we went caroling in the VW bus. Daddy was driving. There must have been at least 9 family members squeezed in, maybe more. There was as much laughter as there was singing.

* * * Aunt Anna’s and Uncle Ellis’ tree seemed so huge to me. And so sparkly, with the silver icicles. That was when icicles were metal rather than plastic. I think one year, Carol Lee and Ernie were the icicle elves, placing boxes of them all over the tree, one strand at a time – gorgeous!

* * * Mother & Daddy always helped us write a little note to Santa when we stayed at Grandma’s and Granddaddy’s. It was placed on their kitchen table next to a juice glass of milk and a saucer of cookies.

The biggest surprise of all was the Christmas morning they showed us a reply note from Santa – – whose hand writing was definitely not theirs. “Santa” said he’d arrived by Sputnik. I was thrilled! I’m not sure how many years later the tale was told that that note was created by Uncle Mace! (Sputnik was launched October, 1957, so I was eight years old.)

* * *  Then there was an actual “Santa sighting” – – From what I recall, both our families + Aunt Kiddy & Uncle Mace, and maybe Aunt Feltorus & Uncle Arthur, were in Metcalfs’ living room. What I thought of as the exotic tree – silver with the revolving color show – may have been on display (or maybe that arrived in the 1960’s). The TV was on. I think Joyce and I were sitting on the floor in front of the coffee table. She and I were probably 10 that year, at the edge of whether to believe in Santa – – wanting to believe and not sure. Suddenly, we became aware of the jingling of bells outside.

Next, we heard thumping sounds, a deep Ho-Ho-Ho, then we saw movement at the small window where the air conditioner is now. What an amazing vision to see the face of . . . . Santa Claus!! As far as I was concerned, this was truly the North Pole Santa himself! My heart was beating fast with the thrill of it all.

Thinking of it now, if Joyce and I were 10, it was the very first Christmas for everyone without Nettie & George, our grandparents, and it would only have been a month since Grandma’s death. We all were likely in need of some Christmas magic. I, for one, was higher than a kite from experiencing that Santa visit. It was so wonderful, I wasn’t even concerned he was appearing on Christmas night and not Christmas Eve.

In some future year, the truth was revealed to us that it was Carl’s brother, Ted, who had been the bringer of good tidings that night.

It seems that each memory led to another, and that one led to still others. What I discovered through inviting remembrances of childhood fun and magic is that my heart is opening to more gratitude and joy in this current holiday season. More love is revealing itself.

Previous post: Mother-Daughter Relationships: The Way Out Is Through