Nancy Kern writes a captivating scene from her childhood in today’s guest post.
You will find details about Nancy below this true story. She is an author whose work appears in the Love Revealed series. 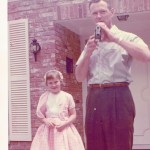 At home, away from his career as a geologist, Dad studied literature and history, especially Greek, Roman, and the revival of those ancient cultures, the Renaissance.

On weekends, our family played monumental card games that went on for hours. Dad hated to lose more than anyone I’ve ever known. On top of that, he insisted that he never made mistakes. My brother, two sisters and I kept count of his most trivial errors, the only kind possible for him. Before we reached ten, we stopped counting.

I never accepted losing to my father. I was determined to beat him at something. Anything! His vocabulary far outstripped mine. His spelling was better. So was his math. He was the undisputed expert in right and wrong, which he backed up with references to the Bible. He could talk circles around grownups, too.

One Sunday afternoon after church, my sisters and I sat at the breakfast table with Dad to play a rousing game of multi-hands solitaire. I sat directly across the table, my sisters on either side. We each had our own deck. We shuffled our cards and dealt our individual hands out on the table, seven small piles across.

Once our hands were laid out, Dad looked up, straight into my eyes, and said, “GO!”

The game began. I shuffled through my deck, turning up every 3rd card, to see if I could play it in my own layout. Even better was to play it in the center, where aces awaited two’s, three’s, and four’s of the same suit. We were in a race to crown the piles of diamonds, hearts, spades and clubs with their kings.

At the age of nine, beating Dad felt dangerous. But I lived on the edge, my face flushed, as red as the queen of hearts.

I knew every card I in my hand. I memorized which cards had been played. I played fast, showing mercy to no one. Red and black cards burned my fingers, making a satisfying smack on the wooden table as I slapped them down on their piles. My older sister, hating competition, went silent. I barely registered her downturned mouth, a glum blur in the corner of my vision. Dad and I battled on. As Dad got more upset, my focus got sharper. The piles at the center of the table grew, while the cards left in my hand shrank. My younger sister played at her own pace, too young to compete, too innocent to care.

By the time I was down to my last few cards, Dad was yelling.

“Harpies! Sirens!” he said. “You’re the ones who sank Ulysses ships!”

I had no clue what he meant. It didn’t matter. What mattered was, I played all my cards that day. And I won.

Previous post: Loss – How to Live Through Intense Grief