Recently, I had a precious experience of attending a group telephone call a friend hosted to talk about ideas for her own memorial service. She shared her thoughts and welcomed input from her guests.

I held the sweetness of the conversation in my heart during the hours and days following the call. Memories surfaced from the time after my mother’s death thirteen years earlier. 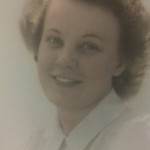 My mama, Frances Kidwell Clayton, happened to die on Thanksgiving Day, which was November 23rd that year. A few years before, she and my father had purchased what is called “pre-need” funeral arrangements, in the community where they grew up and where many in their extended families still live. It is also where they had had their side-by-side grave sites for many years.

A funeral as well as a brief graveside service were held three days after her death. Our family had already discussed wanting to have a kind of memorial service in the Spring, one that could incorporate whatever elements we felt would most represent and celebrate her life and the connections her family and friends held dear of her.

We selected March 31st for what I like to call the Remembrance Gathering. We hoped for post-winter weather for folks’ safe travel (and this proved true, thankfully). In our family’s Christmas holiday letter, we extended our open invitation to all who might want to attend the March gathering. We wanted people to have plenty of time to plan ahead, as many of my parents’ family and friends lived at least a couple hours’ drive away.

Elements We Planned for the Remembrance Gathering

There would be at least an hour centering on memories, so we asked all to consider if they had Fran stories they’d like to share as written or spoken memories. We promised to have volunteers of family and friends to read aloud any written memories from those who could not attend or who planned to attend and would rather not speak in front of the group.

In our earliest planning phase, I told my family what my bereavement mentor had told me. Dr. Dana Cable, of Hood College in Frederick, Maryland, had said that 3-to-4 months after a death is a good time to schedule a memorial service. He said emotions are less raw, people have had some breathing space to begin to process the loss, and folks who are planning the service have more time to go through photographs, music, and such.

We arranged for the celebration to be captured on video. Later, we had copies made to send to some who were not able to be there. 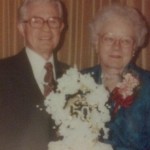 My husband had the idea of including in the celebration a seven-minute segment of my mom from my parents’ 50th wedding anniversary party. So, we rented a large screen t.v. and had it delivered to the church. (In 2001, they seemed to weigh half a ton, not like the much lighter flat screens now).  Everyone was mesmerized by seeing and hearing my vibrant mama review the major life decisions she and my father had made, from dating in high school through relocating to the Shenandoah Valley three and a half years before that 50th anniversary. She was natural and funny, and it was almost like having her right there – it was a big hug from her to all watching. And, the videographer zoomed in on it so it shows up just as well on the remembrance gathering video as it did on the anniversary video.

Benefits from the Remembrance Gathering

The Remembrance Gathering added so much to healing my heart. I am fairly sure it helped everyone who was part of it in any way, including those who sent stories. We had ninety minutes of story after story after story about Fran – from her husband, her two daughters, sister, nieces, close friends, dear former co-workers, her boss, church family, even a neighbor from fifty-some years before with whom she exchanged personal letters yearly at Christmas.

When I attend services where people are invited to come forth with their own memories of the one who has died, I usually come away with a multi-dimensional sense of the person – with many more perspectives of her or him than my personal relationship had yielded. I believe this was able to happen for those who came to this gathering or who viewed the video.

In addition to the loving connections our family and friends enjoyed in co-creating the gathering, I can attest to two specific precious experiences that helped me heal as I lived through grieving the physical absence of my mother.